Use fault in a sentence Part of the San Andreas fault.

to seek and point out faults (of); complain (about); criticize

Middle English faulte from Old French from Vulgar Latin fallita from variant of Latin falsa feminine past participle of fallere to deceive, fail 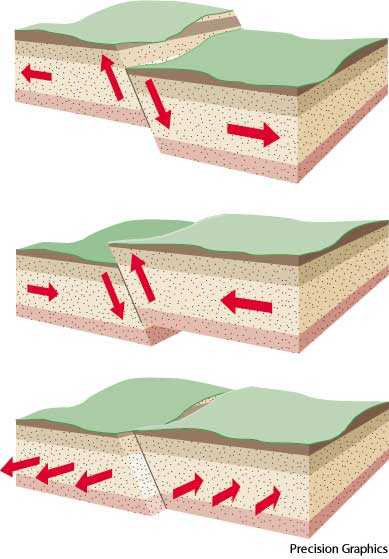 Fault. (n.d.). In YourDictionary. Retrieved from https://www.yourdictionary.com/Fault
A fracture in a rock formation along which there has been movement of the blocks of rock on either side of the plane of fracture. Faults are caused by plate-tectonic forces.

A Closer Look Bedrock, the solid rock just below the soil, is often cracked along surfaces known as planes. Cracks can extend up to hundreds of kilometers in length. When tensional and compressional stresses cause rocks separated by a crack to move past each other, the crack is known as a fault. Faults can be horizontal, vertical, or oblique. The movement can occur in the sudden jerks known as earthquakes. Normal faults, or tensional faults, occur when the rocks above the fault plane move down relative to the rocks below it, pulling the rocks apart. Where there is compression and folding, such as in mountainous regions, the rocks above the plane move upward relative to the rocks below the plane; these are called reverse faults. Strike-slip faults occur when shearing stress causes rocks on either side of the crack to slide parallel to the fault plane between them. Transform faults are strike-slip faults in which the crack is part of a boundary between two tectonic plates. A well-known example is the San Andreas Fault in California. Geologists use sightings of displaced outcroppings to infer the presence of faults, and they study faults to learn the history of the forces that have acted on rocks.
Link to this page
Cite this page

An error or failure. A software fault, also known as a "crash" or "abend," is when the program directs the computer to go outside of its restricted memory boundary. A hardware fault is a failure in one of the circuits. See fault detection, fault isolation and fault management. See also page fault.

A negligent or intentional failure to act reasonably or according to law or duty; an act or omission giving rise to a criminal indictment or a civil tort lawsuit.
Webster's New World Law Dictionary Copyright © 2010 by Wiley Publishing, Inc., Hoboken, New Jersey.
Used by arrangement with John Wiley & Sons, Inc.
Link to this page
Cite this page

WORDS NEAR fault IN THE DICTIONARY