Use box in a sentence Informal in difficulty or a dilemma

outside (of) the box

Informal in a fresh, inventive, unconventional way
a blow struck with the hand or fist, esp. on the ear or the side of the head

Middle English from uncertain or unknown; perhaps
to fight with the fists; engage in boxing

A slap or blow with the hand or fist: a box on the ear.

intransitive
To fight with the fists or in a boxing match.

Middle English from Old English from Latin buxus from Greek puxos
THE AMERICAN HERITAGE® DICTIONARY OF THE ENGLISH LANGUAGE, FIFTH EDITION by the Editors of the American Heritage Dictionaries. Copyright © 2016, 2011 by Houghton Mifflin Harcourt Publishing Company. Published by Houghton Mifflin Harcourt Publishing Company. All rights reserved.
Link to this page
Cite this page 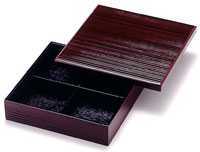 A wooden box.
English Wiktionary. Available under CC-BY-SA license.
Link to this page
Cite this page

(2) Slang for computer. The term typically refers to a personal computer in a desktop or tower case. For example, the phrase "that's a nice Windows box" simply means a "fully equipped or well-made computer running the Windows operating system."

(3) (Box) A cloud storage service from Box, Los Altos, CA (www.box.com) that is used to share files between desktop computers and mobile devices. Introduced in 2005, the service comes in free and paid versions. The OpenBox programming interface (API) enables applications to work with files stored in the Box cloud, and apps from Box and third parties are available. For example, Box Edit lets users modify content directly from the native applications stored in their computers, such as Excel and Photoshop. Sophisticated Collaboration and Notifications Box excels in helping account administrators manage the service. For example, when Box admins send invitations to a user to review files in the cloud, they are notified when the user has downloaded them. See cloud storage.

Box Options
Box provides numerous options including notifying users that recipients downloaded the files offered to them.
Computer Desktop Encyclopedia THIS DEFINITION IS FOR PERSONAL USE ONLY All other reproduction is strictly prohibited without permission from the publisher. © 1981-2017 The Computer Language Company Inc. All rights reserved.
Link to this page
Cite this page

WORDS NEAR box IN THE DICTIONARY