Use eye in a sentence eyed, eye′ing or ey′ing
Obs. to appear (to the eyes)
eye Idioms

an eye for an eye

punishment or retaliation similar or equivalent to the injury suffered

Mil. a command to snap the head to the right (or left) while marching, as a salute when passing in review

give someone the eye

Slang to look at someone, esp. in an admiring or inviting way

have an eye for

to have a keen appreciation of

have an eye to

to watch out for; attend to

in the eye of the wind

Naut. directly against the wind

in the public eye

keep an eye on

to look after; watch carefully

keep an eye out for

to be watchful for

to be on the lookout; be watchful

to see; look at

look someone in the eye

to look directly and assertively into the eyes of another: out of shame he couldn't look me in the eye

to look at amorously or flirtatiously

to make someone aware of the facts, real reasons, etc.

to glance at hurriedly

see with half an eye

to see or understand (something) easily because it is so evident

to refuse to see or think about

turn a blind eye to

to ignore or pretend not to notice (something)

with an eye to 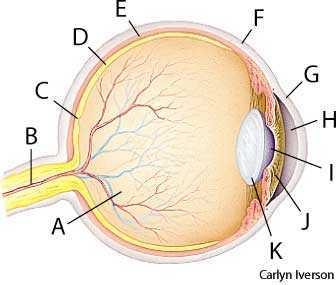 bottom: the eye of hurricane Catarina, off the coast of Brazil in 2004, as seen from the International Space Station

Eye. (n.d.). In YourDictionary. Retrieved from https://www.yourdictionary.com/EYE
Link to this page
Cite this page

(An organ that is sensitive to light, by which means animals see): ocellus

Probably from a nye changing to an eye.

WORDS NEAR eye IN THE DICTIONARY