Use ketchup in a sentence

A condiment consisting of a thick, smooth-textured, spicy sauce usually made from tomatoes.

The term is now used almost exclusively to refer to tomato ketchup. However, at one time it was a more general term for sauce, and it is still occasionally used in this way, as with grape ketchup and mushroom ketchup.

The spelling ketchup became significantly preferred in the United States due to the popularity of Heinz Tomato Ketchup, which used this spelling since shortly after its introduction in 1876 (after earlier using catsup) to distinguish itself from competitors. Other major brands, such as Hunt, subsequently followed, with Del Monte only switching to ketchup in 1988.

Most likely from Malay kicap, from Chinese Min Nan 鮭汁 (kê-chiap, “brine of fish (namely salmon)”), though precise path is unclear – there are related words in various Chinese dialects, and it may have entered English directly from Chinese. Cognate to Indonesian kecap, ketjap (“soy sauce”). Various other theories exist – see Ketchup: Terminology for extended discussion.

Catsup (earlier catchup) is an alternative Anglicization, still in use in U.S.

A bottle of tomato ketchup. 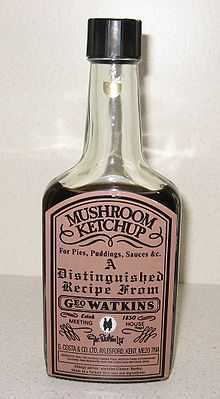 A bottle of mushroom ketchup.
English Wiktionary. Available under CC-BY-SA license.
Link to this page
Cite this page

WORDS NEAR ketchup IN THE DICTIONARY