(Content Delivery Network) A distribution system on the Internet that accelerates the delivery of Web pages, audio, video and other Internet-based content to users around the world. The CDN replicates the content provider's files in servers, called "caching servers" or "edge servers," located in geographically dispersed datacenters. Most CDNs are third-party services; however, large companies may develop their own "enterprise CDN" (eCDN) to support remote locations more effectively. When content is replicated throughout the country or the world, it is delivered to users with greater speed and reliability. The CDN network routes the user's request for content to the appropriate caching server based on the user's location. CDNs are often connected to multiple ISP backbones and have peering relationships with others, providing high availability to users.

Web Acceleration Every CDN accelerates content delivery by nature of its multiple backbones (in most cases) and numerous caching servers. A CDN may also augment acceleration via compression between nodes in its own network. Quite often, only the graphics on a Web page are delivered by the CDN, while the HTML text is sent out from the customer's servers. Streaming and Downloading Video uses extensive network bandwidth, and many customers of a CDN use the service solely to stream video to Web users. A CDN may offer all popular streaming methods such as Flash, Windows Media, Silverlight and progressive download, the latter using the same HTTP protocol as Web pages (see progressive download). Large downloads such as gaming software are also candidates for CDNs. The CDN may pull the data from the customer's origin server, or the customer may upload the files to the CDN. Server-Side Processing The CDN may offer server-side processing of Java and ASP scripts. If the CDN does not provide server-side processing, that operation takes place in the customer's servers, and the CDN can deliver the accompanying graphics or other downloads. Hybrid CDN (Peer-to-Peer) A CDN may support peer-to-peer processing, which requires client software to be installed in the user's computer or pre-installed in a set-top box. The Vendors Akamai Technologies (www.akamai.com), one of the first CDNs and by far the leader, delivers content for some of the largest content publishers in the world. As of 2008, Akamai, along with Limelight Networks (www.llnw.com) and CDNetworks (www.cdnetworks.com), had the lion's share of CDN revenues. Limelight keeps much of its customer traffic on its own international fiber network, and CDNetworks has extensive penetration in the Asian market. Founded by DoubleClick executives in 2005, Panther Express, which later merged with CDNetworks, offered a progressive download service to content publishers of all sizes. Panther made it easy for small websites to come on board and expand. See content peering and Akamai. 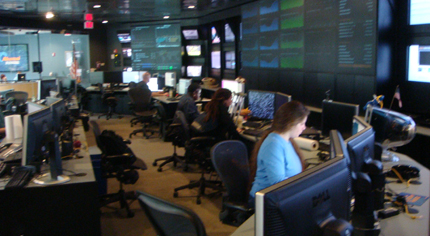 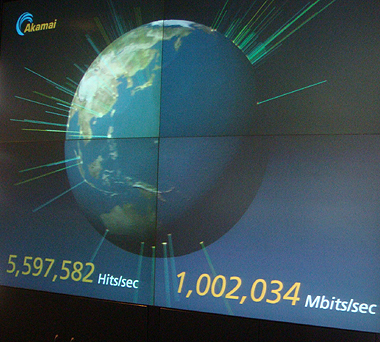 Akamai's Control Center
Moving massive amounts of content every minute of the day, perhaps no other company in the world has a handle on the current state of the Internet as does Akamai. In mid-2008, its rotating world display (bottom) showed more than a trillion bits per second of content being transmitted at that moment.
Computer Desktop Encyclopedia THIS DEFINITION IS FOR PERSONAL USE ONLY All other reproduction is strictly prohibited without permission from the publisher. © 1981-2017 The Computer Language Company Inc. All rights reserved.
Link to this page
Cite this page

WORDS NEAR Cdn IN THE DICTIONARY