The definition of a cathode-ray tube (CRT) is a vacuum tube that creates an image on a fluorescent screen when struck by an electromagnetically charged beam.

An example of a cathode-ray tube is what televisions and computers used to create images before LED and LCD were introduced.

a vacuum tube in which a stream of electrons is electromagnetically focused on a fluorescent screen, producing lighted dots: such tubes are used as oscilloscopes and picture tubes: abbrev. CRT
Webster's New World College Dictionary, Fifth Edition Copyright © 2014 by Houghton Mifflin Harcourt Publishing Company. All rights reserved.
Link to this page
Cite this page

A vacuum tube, formerly used in computer monitors and televisions, that electromagnetically or electrostatically deflects a focused cathode ray toward various points on a phosphorescent screen. 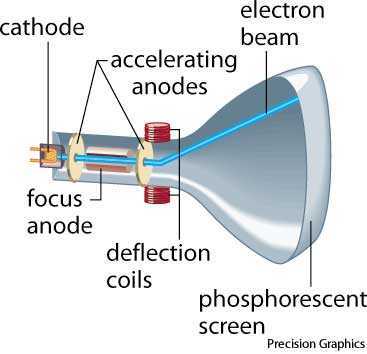 Cathode-ray tube. (n.d.). In YourDictionary. Retrieved from https://www.yourdictionary.com/cathode-ray-tube
A sealed tube in which electrons are emitted by a heated, negatively charged element (the cathode), and travel in a beam toward a positively charged plate (the anode). Depending on the properties of the plate and the speed of the electrons, cathode-ray tubes can generate x-rays, visible light, and other frequencies of electromagnetic radiation. They are central to most television screens, in which the electron beams form images on a phosphor-coated screen.
A Closer Look Cathode-ray tubes (CRTs), also called electron-ray tubes, provide the visual display in such devices as conventional television sets, computer monitors, hospital heart monitors, and laboratory oscilloscopes. CRTs are generally made of funnel-shaped glass vacuum tubes. At the larger end of the tube is a phosphor-coated screen, and at the other end is an electron gun. The gun consists of a heated cathode, or negative electrode, which emits electrons, and a control grid, which controls the intensity of the beam of electrons to vary the brightness of the image. The gun directs the electron beam, or cathode ray, toward the screen, where a positively charged anode attracts the electrons. Outside the tube, coils creating a magnetic field or plates creating an electric field both focus and steer the beam. Wherever the beam strikes the screen, it causes the phosphors to glow. Shapes and images can be formed by manipulating the beam so that its focal point on the screen sweeps across it in various paths and with different brightness. In most CRTs, the beam follows a zigzag path that covers the entire screen many times per second. Color screens use three separate beams that strike three individually colored phosphor cells (having the three primary colors red, blue, and green) that are very close together. The color combinations appear to the eye (at a distance to the screen) as one point of a single color.
Link to this page
Cite this page

WORDS NEAR cathode-ray tube IN THE DICTIONARY