Use volcano in a sentence The definition of a volcano is a rupture in the Earth's crust where molten lava, hot ash, and gases from below the Earth’s crust escape into the air.

If the amount of magma is significant enough, then the magma rises above the surface of the ocean. This is known as an island. When the two plates collide and one plate forces the other plate beneath it, a different reaction occurs.

If this happens, then the friction that is caused during this reaction makes the plate melt that is beneath the other plate. This then causes magma to rise up, and this creates a volcano. The volcanoes that form by this method are usually the most dangerous and the most volatile ones. 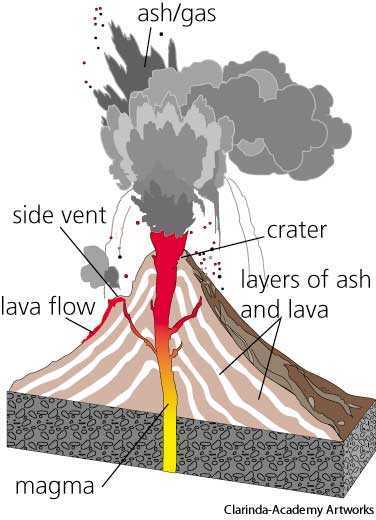 cutaway of an erupting volcano

Volcano. (n.d.). In YourDictionary. Retrieved from https://www.yourdictionary.com/VOLCANO
Link to this page
Cite this page

From Italian vulcano, from Latin Vulcanus (“Vulcan") the Roman god of fire and metalworking.

WORDS NEAR volcano IN THE DICTIONARY