Use geek in a sentence

A couple of geeks.

The definition of a geek is a slang word for a computer expert, someone who loves computers or someone who is socially or physically awkward.
YourDictionary definition and usage example. Copyright © 2018 by LoveToKnow Corp
Link to this page
Cite this page

One use of this term dates from the 1920s and referred to a carnival actor who, among other things, bit off the heads of chickens. In the 1960s and 1970s, a geek was a derogatory term given to smart social outcasts stereotyped as wearing thick glasses and plastic shirt-pocket protectors. Currently the term geek has a broader and less derogatory connotation for specialists in various fields of knowledge, including computer-savvy individuals, some of whom like to hack systems. Computer geeks, as they approach their thirties, often tend to find well-paying jobs such as system administrators or system architects.

A technically oriented person. It has typically implied a "nerdy" or "weird" personality, someone with limited social skills who likes to tinker with scientific or high-tech projects. The origin of the term dates back to the late 1800s. A geek was a carnival performer who bit off the head of a chicken or was part of a freak show. Much More in Vogue Today By the end of the 1990s, it became quite fashionable to be a geek, since countless technical people had become very successful, starting with PCs in the 1980s and throughout the dot-com bubble. See uber geek, nerd and Geekonics. 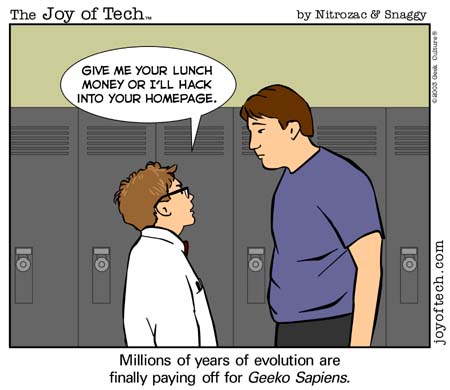 Geek Persuasion
From "The Best of The Joy of Tech" cartoon book by Nitrozac and Snaggy (O'Reilly & Associates, Inc., 2003, ISBN 0-596-00578-4). (Image courtesy of GeekCulture, www.geekculture.com)
Computer Desktop Encyclopedia THIS DEFINITION IS FOR PERSONAL USE ONLY All other reproduction is strictly prohibited without permission from the publisher. © 1981-2017 The Computer Language Company Inc. All rights reserved.
Link to this page
Cite this page

WORDS NEAR geek IN THE DICTIONARY