Use diode in a sentence

diode The heated cathode generates a cloud of electrons that are attracted by the anode, causing a current to flow from the cathode to the anode. Because the anode cannot generate electrons of its own, the current cannot flow in the opposite direction.

The definition of a diode is an electronic device with two transmitting terminals that allows electric current to flow in one direction while blocking current in the opposite direction.

An example of a diode is a light-emitting diode, an LED.

an electronic device with two electrodes, as either an electron tube with an anode and a cathode or a transistor with a pn junction, used mainly as a rectifier since it conducts current in only one direction

An electrical device, such as a semiconductor or electron tube, through which flow of current is generally restricted to one direction. Diodes are often used in or as rectifiers. 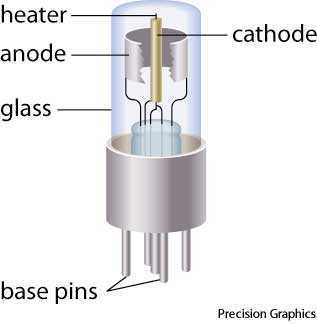 Diode. (n.d.). In YourDictionary. Retrieved from https://www.yourdictionary.com/Diode
An electrical device with two active terminals, an anode and a cathode, through which current passes more easily in one direction (from anode to cathode) than in the reverse direction. Diodes have many uses, including conversion of AC power to DC power, and the decoding of audio-frequency signals from radio signals.
Link to this page
Cite this page

Learned formation, coined by William Eccles in 1919, after Greek δίοδος.

An electronic device with two (di) electrodes, originally in the form of a needle on a natural quartz crystal, and later an electron tube with an anode (positive terminal) and a cathode (negative terminal), but now usually in the form of a transistor with a p-n (positive-negative) junction between a positive and a negative layer of semiconducting materials. The negative layer is doped with impurities to create extra electrons, which are negatively charged.The positive layer is doped to create extra holes into which electrons can migrate when a charge is applied, which has the effect of adding extra positive particles. When current is applied and the electrons move across the junction, from the n semiconductor layer to the p semiconductor layer, and settle into the holes, they release energy in the form of photons, i.e., light. (Note:A diode conducts current in only one direction, like a one-way gate.) The composition of the semiconductor material determines the color of light, how much of it is absorbed, and how much of it is released. In electrical applications, a diode is primarily used as a rectifier, to convert alternating current (AC) to direct current (DC). In free space optics (FSO) and fiber optic transmission systems (FOTS), light sources variously use light-emitting diodes (LEDs) and diode lasers to convert electrical signals to optical signals. FSO and FOTS optical receivers variously use positive-intrinsic-negative (PIN) diodes and avalanche photodiodes (APDs) to convert light to electrical current. See also AC, APD, DC, diode laser, FOTS, FSO, LED, PIN, and rectifier.

(1) An electronic component that acts like a one-way valve. As a discrete component or built into a chip, it is used in a variety of functions. Used as a rectifier, it is a key element in changing AC to DC by limiting current flow to a single direction. Diodes are used as temperature and light sensors and light emitters (LEDs). In communications, they filter out analog and digital signals from carriers and modulate signals onto carriers. In digital logic, they're used as one-way valves and as switches similar to transistors. See laser diode and PN junction.

(2) A type of vacuum tube used in electronic circuits as a rectifier or radio frequency detector. Modern applications of tube diodes are generally limited to rectifiers in high-end audio amplifiers and other specialized high-voltage circuits. The tube diode uses two active elements (cathode and plate) and one passive element (the filament or heater). In typical operation, the cathode is heated by the filament, and the AC voltage is applied to the cathode. The heated cathode releases excited electrons that flow to the plate (anode) and become the rectified current. The diode allows current flow in only one direction. For example, if current were applied to the plate, electron flow could not occur, because the plate's electrons are not heated by the filament. In some instances, the filament is also the cathode. This is accomplished by connecting the AC voltage source to one of the filament's leads. See triode, tetrode, pentode, magnetron and klystron.

The Diode Is the Simplest
Widely used to convert AC to DC (a rectifier), the diode is the least complicated tube type with no grids between the cathode and anode.
Computer Desktop Encyclopedia THIS DEFINITION IS FOR PERSONAL USE ONLY All other reproduction is strictly prohibited without permission from the publisher. © 1981-2017 The Computer Language Company Inc. All rights reserved.
Link to this page
Cite this page

WORDS NEAR diode IN THE DICTIONARY