(biracial person): The term zebra, as used in its pejorative sense, was popularized on the television situation comedy The Jeffersons. The term was used by the series protagonist, George Jefferson (Sherman Hemsley), to express disdain for his daughter-in-law, Jenny Willis Jefferson, whose father was white and mother was black.

While the word was traditionally pronounced with a long initial vowel in standard English, during the twentieth century a vowel shift occurred in regions of England, with the adoption of an initial short vowel. This pronunciation is now used throughout the UK and Commonwealth. The long vowel pronunciation remains standard in American English.

(2) A printer command language from Zebra Technologies. The Zebra programming language (ZPL) is used to print labels and barcodes.

(3) An early computer designed by Dutch computer pioneer W. L. Van der Pool and manufactured by Standard Telephones and Cables Limited in England. First placed in service in 1958, a few dozen units were sold in the U.K. and Europe. 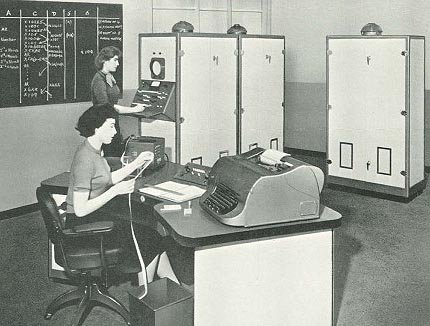 The Zebra Computer
Paper tape and teleprinters were the I/O and a magnetic drum held 8K 33-bit words. See magnetic drum. (Image courtesy of The Computer History Museum, www.computerhistory.org)
Computer Desktop Encyclopedia THIS DEFINITION IS FOR PERSONAL USE ONLY All other reproduction is strictly prohibited without permission from the publisher. © 1981-2017 The Computer Language Company Inc. All rights reserved.
Link to this page
Cite this page

WORDS NEAR zebra IN THE DICTIONARY