An analog audio recording pressed in vinyl. The 45 RPM record holds one song per side, while 33 1/3 RPM "Long Play" records hold an entire album (see LP). With the sound literally "carved" in a spiral groove starting at the outer edge of the platter, the undulations in the groove are an analog of the original acoustic waves. A needle (stylus) is placed in the groove, which oscillates as the platter rotates. The oscillations are converted to electricity, amplified and sent to the speakers. The Stereo V Groove Breakthrough In a monophonic record, an undulating horizontal groove is cut into the vinyl, providing both frequency and amplitude. Stereo, which was a big deal when introduced in the late 1950s, was designed for backward compatibility. Stereo places left and right channels in a V groove, and each side of the groove is 90 degrees from the other. From the horizontal motion of the stylus, the stereo cartridge senses the channels independently, but a monophonic cartridge picks up left and right as one. However, the stereo groove also has a vertical component that provides a left-minus-right difference signal, which is only picked up by the stereo cartridge. A Bit of a Renaissance Audiophiles believe the analog sound in vinyl records is the purest audio recording, and vinyl records and turntables have been making a comeback over the past several years. Although only a fraction of total music revenue, approximately six, nine and 12 million vinyl record albums were sold in 2013, 2014 and 2015 respectively. See stylus and turntable. 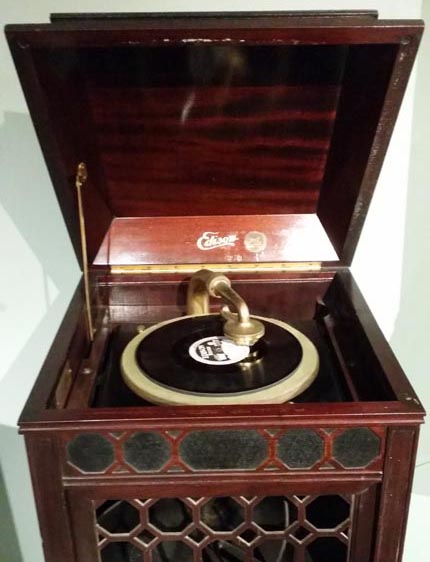 The 78 RPM Record
Originally constructed of shellac resin, 78 records made of vinyl debuted during World War II, when shellac was limited. This Edison 78 RPM player was made by the Victor Talking Machine Company circa 1916. 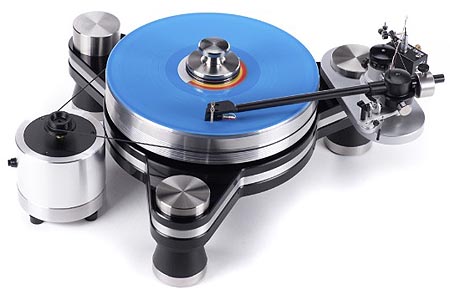 "The Sweet Sound of Vinyl"
A far cry from the 78 turntable above, this VPI Avenger for 33 RPM LPs is pure audiophile quality. "The sweet sound of vinyl" is the company's tag line for the product. (Image courtesy of VPI Industries, www.vpiindustries.com)
Computer Desktop Encyclopedia THIS DEFINITION IS FOR PERSONAL USE ONLY All other reproduction is strictly prohibited without permission from the publisher. © 1981-2017 The Computer Language Company Inc. All rights reserved.
Link to this page
Cite this page

WORDS NEAR vinyl-record IN THE DICTIONARY