Use Saturn in a sentence Saturn is defined as a planet in our solar system which is know for its rings.

An example of Saturn is the sixth planet from the Sun. 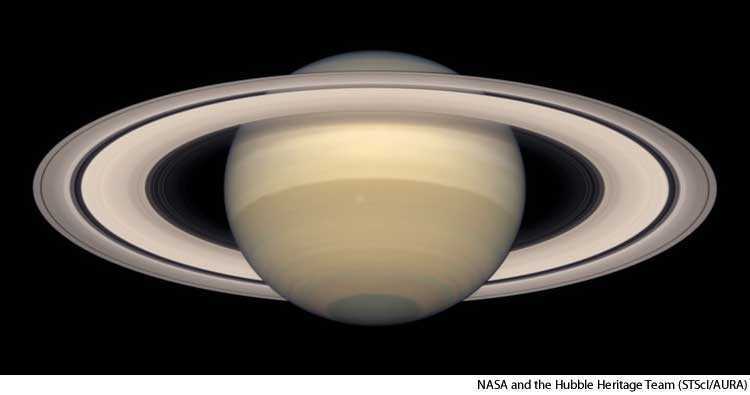 photographed by the Hubble Space Telescope in 1998

Saturn. (n.d.). In YourDictionary. Retrieved from https://www.yourdictionary.com/Saturn
The sixth planet from the Sun and the second largest, with a diameter about ten times that of Earth. Saturn is a gas giant that is almost as large as Jupiter in diameter but with only about 30 percent of Jupiter's mass. Its mainly gaseous composition together with its rapid axial rotation (it rotates once every 10.7 hours) cause a noticeable flattening at the poles and a prominent equatorial bulge. Saturn is encircled by a large, flat system of rings made up of rock fragments and tiny ice crystals, first observed by Galileo in 1610. The rings are believed to be unstable and therefore likely of recent origin; they may have been formed from bodies such as asteroids or moons that were shattered as they approached closer than the Roche limit. Saturn has numerous moons, of which the largest is Titan, the second largest moon in the solar system after Jupiter's Ganymede and larger than both Mercury and Pluto.

WORDS NEAR Saturn IN THE DICTIONARY