Use rom in a sentence An illustration from the 1800's of a rom and his family who are part of an ethnic group call the Roma or Romani and are know to be nomadic gypsies.

pl. Rom, or Ro·ma
A Romani, especially a Romani man or boy.

Computers
Memory hardware that allows fast access to permanently stored data but prevents addition to or modification of the data.

Rom. (n.d.). In YourDictionary. Retrieved from https://www.yourdictionary.com/Rom
Short for read-only memory. Computer hardware that stores programs or data that cannot be added to, modified, or deleted. ROM does not require power to maintain its contents, and is often used to save instructions that enable the computer's operating system to communicate with other hardware.
Link to this page
Cite this page

From Romani rom (“man"), probably ultimately from Sanskrit à¤¡à¥‹à¤® (doma, “member of a low caste of travelling musicians and dancers"). See some more information at Roma.

The other major categories of words for the Roma are cognates of Gypsy (words related to Egypt) and cognates of tzigane (words derived from Greek); see those entries for more information.

Semiconductor-based computer memory that stores program code that the central processing unit (CPU) can read, but not write to, i.e., change or modify in any way. Programs are stored in ROM on semiconductor chips, also known as firmware or hardware, during the manufacturing process. Such programs are said to be hard-coded to distinguish them from software. The term readonly memory distinguishes it from random access memory (RAM), which also is stored on semiconductors, but is read/write memory. Unlike RAM, ROM is not volatile, i.e., the programs are not lost when the electric power is lost or turned off. Therefore, programs required during system start-up commonly are stored in ROM. Note: Many ROM chips can be reprogrammed after erasing the previous content either electrically or with an external source of ultraviolet (UV) light. See also CPU, firmware, hardware, RAM, semiconductor, and software.

(1) In an Android phone, a file for firmware updating. See Android ROM.

(2) (Read Only Memory) A memory chip that permanently stores instructions and data. Also known as "mask ROM," its content is created in the last masking stage of the chip manufacturing process, and it cannot be changed. Stand-alone ROM chips and ROM banks in microcontroller chips are used to hold control routines for myriad applications. ROMs were also widely used to hold the BIOS in early PCs as well as plug-in cartridges for video games. Although EPROMs, EEPROMs, and particularly flash memory, are the kinds of non-volatile storage one hears about more often, ROM is a mature, inexpensive technology that is easy to integrate into the design of any CMOS chip. ROMs Are Secure Unlike flash memory, which can be updated, the data in ROM chips cannot be tampered with. If encryption keys and other security codes are stored in a ROM, they cannot be altered unless the chip is physically replaced (see secure boot). See memory types, RAM, EEPROM and flash memory. 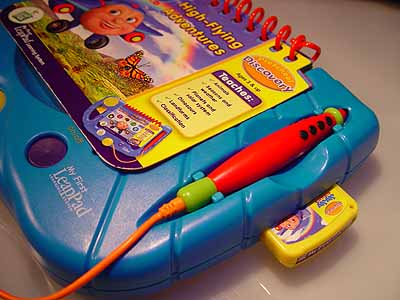 ROMs Are Everywhere
Cartridges that contain nothing more than a ROM chip are widely used to hold games and educational programs. The yellow ROM cartridge in this image (bottom right) contains a program for the LeapPad Learning System for preschoolers.
Computer Desktop Encyclopedia THIS DEFINITION IS FOR PERSONAL USE ONLY All other reproduction is strictly prohibited without permission from the publisher. © 1981-2017 The Computer Language Company Inc. All rights reserved.
Link to this page
Cite this page

WORDS NEAR rom IN THE DICTIONARY