(MOTOrola X) The first Android smartphone from Google's Motorola subsidiary. Introduced in August 2013, its 4.7" screen was near phablet size. The Moto X had impressive battery life and was available in a raft of colors, including wood grain. Without touching the phone, it responded to voice commands, and the camera was started just by twisting the wrist and shaking it. Similar to Google's Nexus models, there was minimal customization beyond the stock Android OS. See Moto Z and Google Nexus. See also Google X Lab. 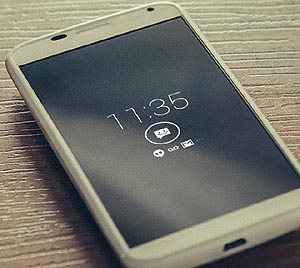 Active Display - Always Visible
The time of day and latest notifications were always visible on screen, taking minimal battery power because only those pixels are energized. (Image courtesy of Google Inc.)
Computer Desktop Encyclopedia THIS DEFINITION IS FOR PERSONAL USE ONLY All other reproduction is strictly prohibited without permission from the publisher. © 1981-2017 The Computer Language Company Inc. All rights reserved.
Link to this page
Cite this page

WORDS NEAR moto-x IN THE DICTIONARY