Use led in a sentence

Led is the past tense of lead.

An example of led is someone who followed another somewhere.

a semiconductor diode that emits light when voltage is applied: used in electric lighting, alphanumeric displays, as on digital watches, etc.

Past tense and past participle of lead1

A semiconductor diode that converts applied voltage to light and is used in lamps and digital displays.

Led. (n.d.). In YourDictionary. Retrieved from https://www.yourdictionary.com/Led
Short for light-emitting diode. An electronic semiconductor device that emits light when an electric current passes through it. They are considerably more efficient than incandescent bulbs, and rarely burn out. LEDs are used in many applications such as flat-screen video displays, and increasingly as general sources of light.

A semiconductor light source in the form of a transistor with a positive and a negative layer of particular semiconducting materials and a p-n (positive-negative) junction between them.The negative layer is doped with impurities to create extra electrons, which are negatively charged.The positive layer is doped to create extra holes into which electrons can migrate when a charge is applied, which has the effect of adding extra positive particles.When current is applied and the electrons move across the junction, from the n semiconductor layer to the p semiconductor layer, and settle into the holes, they release energy in the form of photons, i.e., light. (Note: A diode conducts current in only one direction, like a one-way gate.) The composition of the semiconductor material determines the color of light, how much of it is absorbed, and how much of it is released. LEDs manufactured with aluminum gallium arsenide (AIGaAs) are used in infrared (IR) applications such as fiber optics.Various other compounds, most including gallium (Ga), to create other colors in the visible and ultraviolet (UV) spectrum.Visible light-emitting diodes (VLEDs) operate in the visible light spectrum, and are found in clocks, watches, calculators, gauges, meters, and a wide variety of other devices.The infrared LEDs used in fiber optic transmission are, of course, much more sophisticated. LEDs pulse on and off relatively slowly, as specified by the cycle time, i.e., rise and fall times of signal intensity. Therefore, LEDs are relatively bandwidth-limited. LEDs also generate signals of relatively broad spectral width in the 850 nm region (850 Band), which wavelength attenuates substantially over relatively short distances. Slower LEDs emit light from an area etched into the surface of a semiconductor chip, while the faster LEDs emit light from the edge of the chip. The physical design of LEDs is such that they couple efficiently only to the relatively broad inner core of multimode fiber (MMF), and they do not tightly focus a collimated beam of light as does a laser diode. LEDs are used in local area networks (LANs), where they support transmission rates of up to 1 Gbps over relatively short distances. LEDs also are used in certain other short-haul transmission systems, including some passive optical networks (PONs). LEDs are relatively inexpensive and durable. See also 850 Band, coupling efficiency, cycle time, diode, IR, LAN, laser diode, MMF, PON, spectral width, transistor, UV, VCSEL, visible light, VLED, wavelength, and window.

(Light Emitting Diode) A display and lighting technology used in almost every electrical and electronic product on the market, from a tiny on/off light to digital readouts, flashlights, traffic lights and perimeter lighting. LEDs are also used as the light source in multimode fibers, optical mice and laser-class printers. See LED lightbulb. LEDs Vs. LCDs In the early 1970s, red LEDs were used in the first digital watches, but were superseded by lower-power LCDs within a few years. LEDs still use more power than LCDs, but less power than incandescent bulbs. They also last for decades and are virtually indestructible. LEDs and LCDs coexist on countless devices where the LEDs provide the status lights, and the LCDs display data. In addition, white or red, green and blue LEDs are used as the backlight source on many LCD TV sets. See LCD, LED TV and flat panel TV. Several Colors LEDs are semiconductor diodes that typically emit a single wavelength of light when charged with electricity. Originally red, today, several colors can be generated based on the material used for the tips of the probes. Aluminum indium gallium phosphide (AlInGaP) is used for red and yellow. Indium gallium nitride (InGaN) is used for green and blue, and with the addition of phosphor, for white light as well. See digital billboard, OLED, IRED, LED printer, fiber optics glossary and Nixie tube.

An LED Unit
The LED is the semiconductor die, which sits in a reflective cup that is also a heat sink. Voltage is applied to the LED, and electrons and holes in the two semiconductor layers are attracted to each other at the junction. When they combine, photons are created. 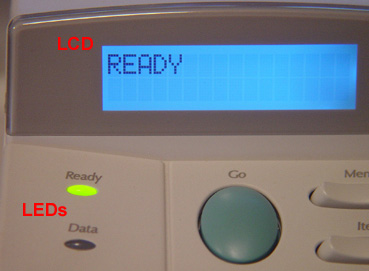 LEDs and LCDs Are Used Together
Small alphanumeric readouts can be LED or LCD, but the indicator lights on countless products are LEDs. 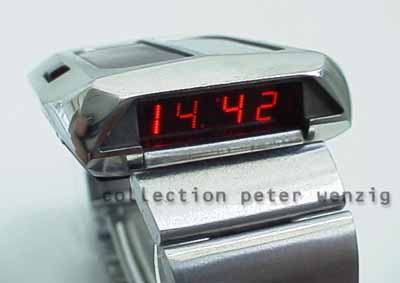 First LED Watch
The Synchronar 2100 was the first LED watch and the first solar powered watch. It preceded Hamilton's famous Pulsar LED watch in 1970. (Image courtesy of the private collection of Peter Wenzig.) 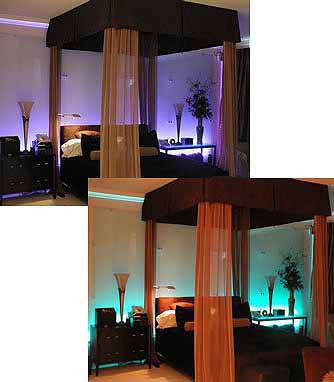 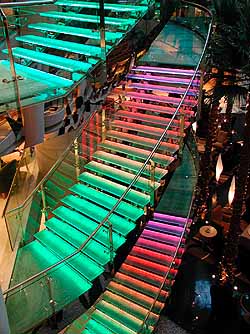 LEDs Offer Flexibility
A flick of a switch changes the ambience in this Los Angeles bedroom (top), while the Westin Hotel staircase in Shanghai (bottom) cycles colors or becomes a musical light show. (Images courtesy of Color Kinetics, Inc., Bedroom design and photo by Steven Cordrey. Staircase by Light Directions Hong Kong, photo by Friendly Light.)
Computer Desktop Encyclopedia THIS DEFINITION IS FOR PERSONAL USE ONLY All other reproduction is strictly prohibited without permission from the publisher. © 1981-2017 The Computer Language Company Inc. All rights reserved.
Link to this page
Cite this page

WORDS NEAR led IN THE DICTIONARY