Use kiosk in a sentence A jewellry kiosk in a shopping mall.

The definition of a kiosk is a small storefront or booth in which magazines, newspapers and other related items are sold, or an interactive, free-standing terminal.
YourDictionary definition and usage example. Copyright © 2018 by LoveToKnow Corp
Link to this page
Cite this page

Ultimately ( partly via French kiosque ) (Italian chiosco with French ki- and Italian chi- representing Turkish palatalized k- ) from Turkish köşk gazebo, pavilion from Persian kōšk palace from Middle Persian of unknown origin Word History: Kiosk comes from the Turkish word köşk, which originally referred to a kind of open pavilion or summerhouse in Turkey and Persia, often built on a hexagonal or many-sided base. The upper classes of the Ottoman Empire would enjoy entertainments and view their gardens in the comfort of such buildings. When the word first began to appear in English, kiosk referred to these Middle Eastern pavilions, which Europeans imitated in their own gardens and parks. In France and Belgium, the word kiosque was applied to something lower on the scale, structures resembling these pavilions but used as places to sell newspapers or as bandstands. When such lowly structures began to be built in England for these purposes, the word kiosk was reborrowed from French in the middle of the 1800s with the meaning “a place where newspapers are sold.”

A small, self-standing structure such as a newsstand or ticket booth. The original kiosk had room inside for a person who handled the transactions; however, the term evolved to refer to unattended self-service booths with computers that dispense information or make sales via a touchscreen. Other than simple soda or candy machines, almost any modern vending machine that accepts credit cards can be called a kiosk. For example, digital photo kiosks are today's counterpart to the earlier, manned kiosks for analog film developing. Accepting memory card or CD/DVD input, they allow users to select images and perform limited editing. The units can make prints on the spot as well as burn them onto a CD. See self-service application and touchscreen.

The Photo Kiosk
Photo kiosks with touchscreens have popped up in shopping malls and venues worldwide. 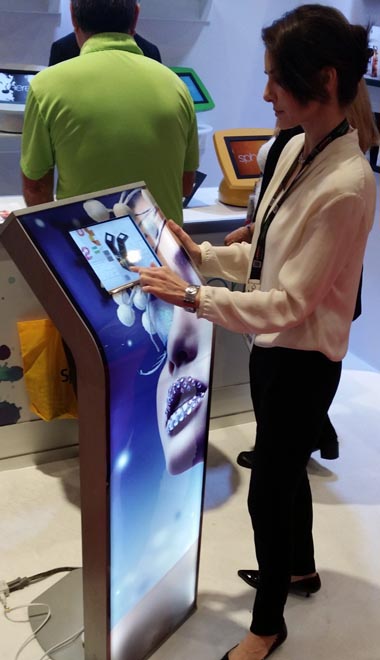 Tablet Kiosks
The flexibility of a tablet makes them ideal for kiosk use. Armodilo Display Solutions makes a variety of desktop and free-standing housings that securely hold Apple, Android, Windows and BlackBerry tablets. 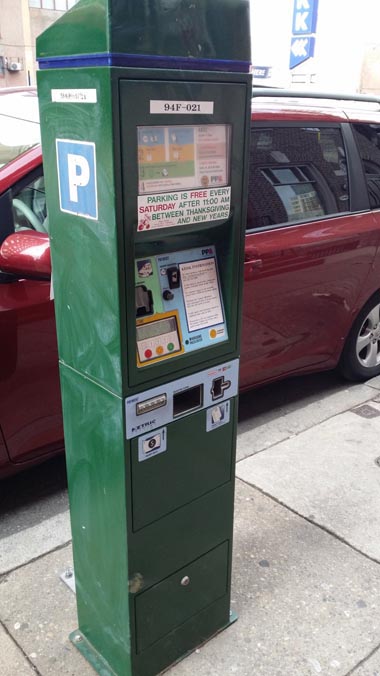 Self Service
Any stand-alone self-service unit can be called a kiosk, such as this parking ticket dispenser in Philadelphia, which accepts cash and credit cards.
Computer Desktop Encyclopedia THIS DEFINITION IS FOR PERSONAL USE ONLY All other reproduction is strictly prohibited without permission from the publisher. © 1981-2017 The Computer Language Company Inc. All rights reserved.
Link to this page
Cite this page

WORDS NEAR kiosk IN THE DICTIONARY