Use aerodynamics in a sentence A simulation of an aircraft in wind tunnel used in the study of aerodynamics.

The definition of aerodynamics is the study of movement of matter in relation to air or other gasses.

An example of a study of aerodynamics is to determine the potential speed of a vehicle based on the way its shape will move through air.

the branch of aeromechanics that deals with the forces (resistance, pressure, etc.) exerted by air or other gases in motion
the characteristics of the outer body of a vehicle, aircraft, etc., that affect the efficiency with which it moves through the air
Webster's New World College Dictionary, Fifth Edition Copyright © 2014 by Houghton Mifflin Harcourt Publishing Company. All rights reserved.
Link to this page
Cite this page

used with a sing. verb
The dynamics of bodies moving relative to gases, especially the interaction of moving objects with the atmosphere. 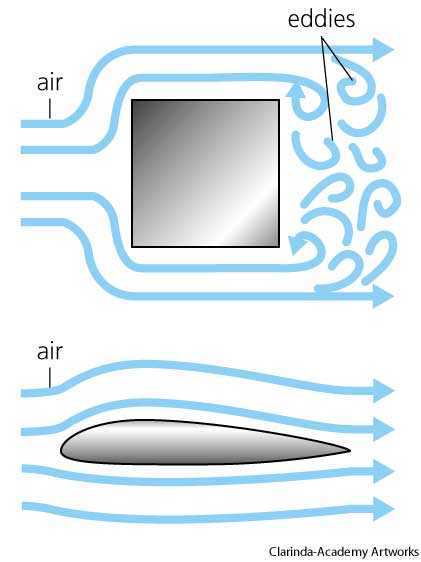 Aerodynamics. (n.d.). In YourDictionary. Retrieved from https://www.yourdictionary.com/Aerodynamics
The study of the movement of air and other gases. Aerodynamics includes the study of the interactions of air with moving objects, such as airplanes, and of the effects of moving air on stationary objects, such as buildings.
A Closer Look The two primary forces in aerodynamics are lift and drag. Lift refers to (usually upward) forces perpendicular to the direction of motion of an object traveling through the air. For example, airplane wings are designed so that their movement through the air creates an area of low pressure above the wing and an area of high pressure beneath it; the pressure difference produces the lift needed for flight. This effect is typical of airfoil design. Drag forces are parallel and opposite to the object's direction of motion and are caused largely by friction. Large wings can create a significant amount of lift, but they do so with the expense of generating a great deal of drag. Spoilers that are extended on airplane wings upon the vehicle's landing exploit this tradeoff by making the wings capable of high lift even at low speeds; low landing speeds then still provide enough lift for a gentle touchdown. Aeronautical engineers need to take into account such factors as the speed and altitude at which their designs will fly (lower air pressures at high altitudes reduce both lift and drag) in order to optimally balance lift and drag in varying conditions.
Link to this page
Cite this page

WORDS NEAR aerodynamics IN THE DICTIONARY