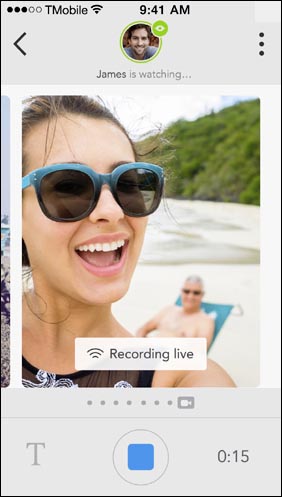 Glide Mobile Video Messaging
The Glide app (www.glide.me) lets users record and send a video up to five minutes long, and it keeps the ongoing video conversation in a thread like text messaging apps. In this example, James, the recipient, was notified that a video was being made, and he is watching it record in real time.
Computer Desktop Encyclopedia THIS DEFINITION IS FOR PERSONAL USE ONLY All other reproduction is strictly prohibited without permission from the publisher. © 1981-2017 The Computer Language Company Inc. All rights reserved.
Link to this page
Cite this page

WORDS NEAR video-chat IN THE DICTIONARY