any of an order (Coelacanthiformes) of lobefin fishes, now extinct except for the latimeria

Any of various mostly extinct lobe-finned fishes of the group Coelacanthiformes or Actinistia, known only in fossil form until a living species, Latimeria chalumnae, was identified in 1938. A second Latimeria species was described in 1999. 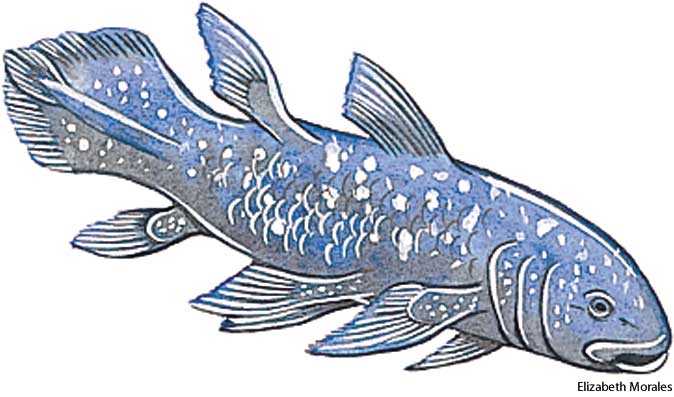 Coelacanth. (n.d.). In YourDictionary. Retrieved from https://www.yourdictionary.com/coelacanth
Any of various fishes of the group Coelacanthiformes or Actinistia, having lobed, fleshy fins. Coelacanths are crossopterygians, the ancient group of lobe-finned fishes that gave rise to land vertebrates. They were known only from Paleozoic and Mesozoic fossils until a living species (Latimeria chalumnae) was found in the Indian Ocean in 1938. A second Latimeria species was described in 1999.
Link to this page
Cite this page

WORDS NEAR coelacanth IN THE DICTIONARY