The definition of centripetal force is what allows something to move in a curved path by pulling whatever is going around in a circle into the middle of the circle.

An example of centripetal force is the rotation of the Earth around the Sun.

the force tending to pull a thing toward the center of rotation when it is rotating around a center
Webster's New World College Dictionary, Fifth Edition Copyright © 2014 by Houghton Mifflin Harcourt Publishing Company. All rights reserved.
Link to this page
Cite this page

The component of force acting on a body in curvilinear motion that is directed toward the center of curvature or axis of rotation. Centripetal force is necessary for an object to move with circular motion. 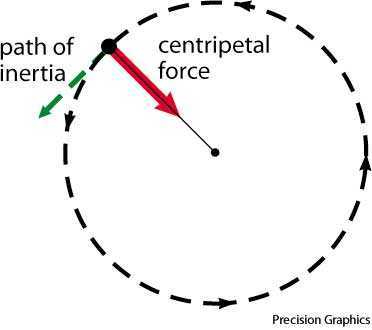 Centripetal force. (n.d.). In YourDictionary. Retrieved from https://www.yourdictionary.com/centripetal-force
A force acting on a moving body at an angle to the direction of motion, tending to make the body follow a circular or curved path. The force of gravity acting on a satellite in orbit is an example of a centripetal force; the friction of the tires of a car making a turn similarly provides centripetal force on the car.
A Closer Look In a popular carnival ride, people stand with their backs against the wall of a cylindrical chamber. The chamber spins rapidly, the floor drops out, but the riders remain pressed against the wall without falling. Although the riders may insist they stay aboard because of an outward force pushing them against the wall, the reality is the opposite: the riders are subject to an inward, or centripetal, force. As the ride spins, it forces the riders to travel in a circle. According to Isaac Newton's law of inertia, objects in motion tend to travel in a straight line at constant speed unless acted on by an external force. To make an object travel along a curved path, some force—the centripetal force—must push the object toward the center of curvature of that path. In the case of the circular path, the direction of the force is toward the center of rotation. The wall of the ride's cylindrical chamber accomplishes this by pushing the riders toward the center (with the friction between the riders and the wall holding the riders up). The force of the Earth's gravity acts as a centripetal force on orbiting objects, such as the Earth's Moon, which is constantly being accelerated toward the center of the Earth, as in free fall. The Moon has enough inertia not to plummet into the Earth but not so much that it can escape the Earth's pull, and thus it will orbit almost indefinitely.
Link to this page
Cite this page

WORDS NEAR centripetal force IN THE DICTIONARY