(Complementary Metal Oxide Semiconductor) Pronounced "c-moss." The most widely used integrated circuit design. It is found in almost every electronic product from handheld devices to mainframes. CMOS uses PMOS and NMOS transistors wired together in a balanced fashion that causes less power to be used than NMOS or PMOS transistors by themselves. The first transistors were bipolar, which are still used when higher power is required. CMOS and bipolar are also used in combination for many applications. See MOSFET, FET and bipolar transistor. See also CMOS memory.

A Note from the Author

Years ago, we had a kitten at the beach that we named CMOS. When we introduced the cute feline to people while the surf was slapping the sand, everyone thought it was such an appropriate name for a beach cat. "Sea Moss." Of course! However, when we told them her name stood for "complementary metal oxide semiconductor," they didn't come around much any more. 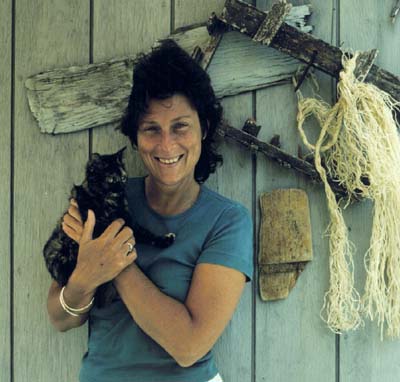 CMOS and Irma
This picture of CMOS and Alan Freedman's wife was taken one summer in Fair Harbor, NY in the early 1980s. CMOS didn't last long, as Alan became quite allergic to the cat a few months later.
Computer Desktop Encyclopedia THIS DEFINITION IS FOR PERSONAL USE ONLY All other reproduction is strictly prohibited without permission from the publisher. © 1981-2017 The Computer Language Company Inc. All rights reserved.
Link to this page
Cite this page

WORDS NEAR CMOS IN THE DICTIONARY