The Windows 10 augmented reality platform, which superimposes 3D images onto the user's view. In contrast, a virtual reality system is entirely immersive, and users have to remain stationary to avoid bumping into objects in the room. Users of the Windows HoloLens goggles move around comfortably in their environment. HoloLens The primary component of the system is the HoloLens 3D goggles, which uses motion sensing that evolved from Microsoft's Kinect technology but with a wider 120 degree field of vision. The HoloLens has a built-in CPU, graphics processing unit (GPU) as well as a holographic processing unit (HPU), which is a dedicated chip for operating in the environment.

The HoloLens Goggles
Unlike virtual reality goggles that prevent the user from moving around, HoloLens wearers can move about in their environment. HoloLens uses gestures, voice and eye movement to direct the action. (Image courtesy of Microsoft Corporation.) 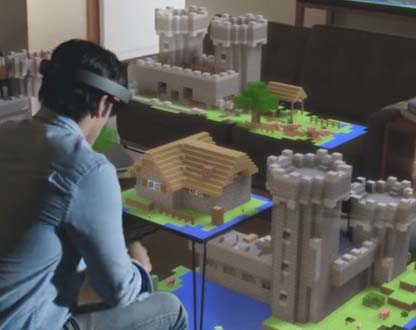 A New Gaming Experience
Although it will be used for many applications, gaming with HoloLens is expected to become popular. (Image courtesy of Microsoft Corporation.)
Computer Desktop Encyclopedia THIS DEFINITION IS FOR PERSONAL USE ONLY All other reproduction is strictly prohibited without permission from the publisher. © 1981-2017 The Computer Language Company Inc. All rights reserved.
Link to this page
Cite this page

WORDS NEAR Windows Holographic IN THE DICTIONARY