An electrostatic memory in the very first computers that used a cathode ray tube (CRT) for storage. Officially known as the Williams-Kilburn tube, it was developed at the University of Manchester in England by Professor F.C. (Freddie) Williams and graduate student Tom Kilburn. First deployed in the Baby computer in 1948, they were also used in the Whirlwind and IBM 701. Never the most reliable of devices, Williams tubes were superseded by delay line and magnetic core memories. See Whirlwind, IBM 701 and core storage. Writing and Reading Data were written on the screen by gating an electron beam on and off, creating a grid of dim and bright spots (0s and 1s). The visibility of the spots was not read by a person, rather the secondary electrons emitted at each spot built up a charge and turned the spots into capacitors (made up of the inside phosphor coating, the glass in the middle and a signal plate on the outside). Data were read by sweeping the beam across the grid using a lower intensity. Synchronized with the timing of the sweep, if the spot was bright, its greater charge caused the beam to reach the signal plate, and a 1 was output. If it was dim, a 0 was output. See Baby. 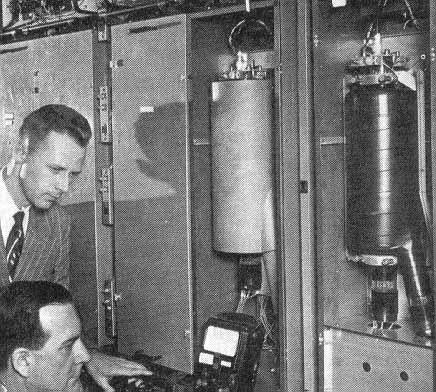 Thirty Two Bytes
Williams tubes used in the Whirlwind computer in 1950 held a whopping 256 bits each, equivalent to 32 bytes of storage. The bits were "painted" on the surface of the tube, and their electrostatic charges determined their content. (Image courtesy of The MITRE Corporation Archives.)
Computer Desktop Encyclopedia THIS DEFINITION IS FOR PERSONAL USE ONLY All other reproduction is strictly prohibited without permission from the publisher. © 1981-2017 The Computer Language Company Inc. All rights reserved.
Link to this page
Cite this page

WORDS NEAR Williams tube IN THE DICTIONARY