The input device used to control a video game. Controllers have evolved from a single joystick with one button to devices with joy sticks, pedals and dozens of buttons. See video game console, joystick and Kinect. 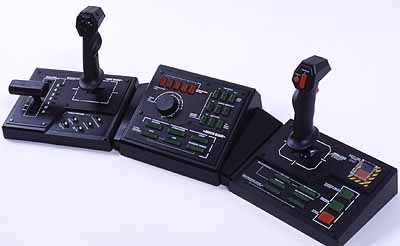 Full Cockpit Controls
Capcom's Steel Battalion controller for the Xbox puts the gamer inside a futuristic robotic war machine. It uses joysticks, levers, dials and more than 40 buttons to simulate the cockpit of the "Vertical Tank." (Image courtesy of Capcom Entertainment.)

The Gamepad
Also called "joypads" and "control pads," a gamepad is held in the hands and operated with both thumbs such as this wireless unit from Sony for its PlayStation3. Direction buttons, or a directional paddle, are typically on the left side with the action buttons on the right. (Image courtesy of Sony Corporation.)

Flight Simulator Controller
Perhaps the most elaborate game controller ever, high-end gaming PC maker MAINGEAR introduced a cockpit controller for diehard enthusiasts in 2012. With the monitor placed on top of the controller, you are flying the plane! For more information, visit www.maingear.com.
Computer Desktop Encyclopedia THIS DEFINITION IS FOR PERSONAL USE ONLY All other reproduction is strictly prohibited without permission from the publisher. © 1981-2017 The Computer Language Company Inc. All rights reserved.
Link to this page
Cite this page

WORDS NEAR video game controller IN THE DICTIONARY