The 40th president of the United States (1981-1989). An actor turned politician, he was governor of California (1967-1975) and defeated the incumbent, Jimmy Carter, in the 1980 presidential election. His administration was marked by economic recovery, military involvement in Grenada, Central America, Lebanon, and Libya, and improved relations with the Soviet Union. 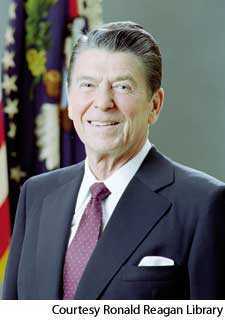 WORDS NEAR Reagan Ronald Wilson IN THE DICTIONARY