An alternate Windows interface from Microsoft that was introduced in early 1996, but never caught on. Bob came with a word processor, checkbook and other home-oriented utilities and was designed for novices and people afraid of computers. Rather than the typical desktop metaphor, it used household rooms that could be decorated with familiar objects. There was even a selection of outdoor scenes visible through the windows in the house. "Rover" the dog and other animated guides provided online help. Too Cutesy Bob never became popular because it was downright silly, treating people as if they were infants. In fact, the name "Bob" was chosen because surveys claimed it was the friendliest name. But instead of refining the Windows interface, designers went to the other extreme. People were, and still are, afraid of computers because the menus are too complicated. The only help novices ever needed or still need is a separate beginner's menu with limited choices, not turning the desktop into a house. 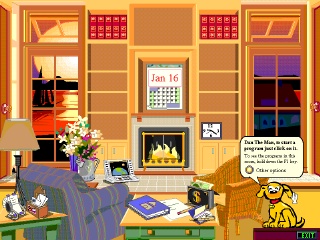 Window Views
Microsoft Bob had a different meaning for the word "windows." It didn't refer to application windows on screen; actual views looking outdoors from the house windows were provided (see top image). Words such as "Looky" were meant to be friendly, but turned out to be silly. (Screen shot courtesy of Dan Rose.)
Computer Desktop Encyclopedia THIS DEFINITION IS FOR PERSONAL USE ONLY All other reproduction is strictly prohibited without permission from the publisher. © 1981-2017 The Computer Language Company Inc. All rights reserved.
Link to this page
Cite this page

WORDS NEAR Microsoft Bob IN THE DICTIONARY