A light source that is created by a light emitting diode (LED). For decades, LEDs have been used as indicator lights on myriad products; however, starting in the 2000s, they began to replace incandescent, halogen and fluorescent bulbs. LEDs draw considerably less power and are up to 80% more efficient. Although claims are made for some bulbs lasting 25 years, one should expect a long lifespan under normal usage. In Their Infancy As of 2016, LED bulbs are still more expensive than incandescent bulbs; however, prices are constantly decreasing. Companies continue to experiment with numerous designs. For example, when red, green and blue LEDs are combined, they produce white light. Another method uses a blue LED and yellow or red phosphors. New Lights - A Different Power Source As incandescent bulbs are replaced with LED bulbs using the same Edison screw mount, the LED bulb must include AC to DC conversion. However, if the bulb's power source is DC such as from powered Ethernet, they are more efficient (see PoE and Edison base). See incandescent bulb, halogen bulb, fluorescent bulb, Acandescent bulb, OLED lighting and LED. 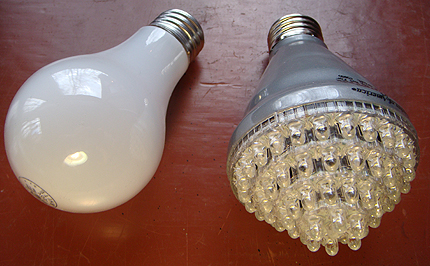 Incandescent Vs. LED
The LED bulb on the right draws 3.5 watts but delivers the same brightness as the 45-watt bulb on the left. This LED bulb casts a very white light; however, LED bulbs run the gamut from warm yellow to white-blue (see color temperature). 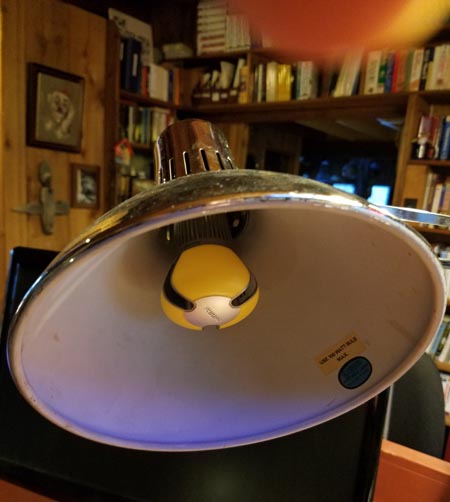 They Sure Are Weird Looking
This Philips LED bulb hardly resembles incandescent lighting, which has been used for more than a century.

LED Night Light - 23 Times Less Power
Instead of the 7 watt incandescent bulb in the typical night light, this LED uses 0.3 watts. The blue arrow points to the single LED; the red arrow shows the light sensor.
Computer Desktop Encyclopedia THIS DEFINITION IS FOR PERSONAL USE ONLY All other reproduction is strictly prohibited without permission from the publisher. © 1981-2017 The Computer Language Company Inc. All rights reserved.
Link to this page
Cite this page

WORDS NEAR LED bulb IN THE DICTIONARY