An Android smartphone and tablet brand from Google that is "pure Android," meaning that there are no added user interface features or extra apps from the device maker or carrier, many of which cannot be removed by the user. Open Source or Closely Controlled Although Google promotes Android as an open source platform for all hardware vendors, it collaborates with some of them to create Nexus-branded phones and tablets that must adhere to Google standards. In 2010, Google sold the HTC-manufactured Nexus One directly from its website. Subsequently, Nexus S and Galaxy Nexus phones from Samsung were offered by the carriers. In 2012, Google resurrected its e-commerce site to directly sell Nexus devices from Samsung, LG and others. Motorola Mobility - In, Then Out Also in 2012, Google acquired Motorola's phone division (Motorola Mobility), and although later spun it off to Lenovo, Motorola introduced the Nexus 6 smartphone in 2014, followed by tablets from HTC. Also in 2014, a set-top box made by Asus was introduced (see Nexus Player), and smartphones from LG (Nexus 5X) and Huawei (Nexus 6P) followed in 2015. In 2016, Google introduced the Pixel phone made by HTC (see Pixel phone). See Android and Nexus One. 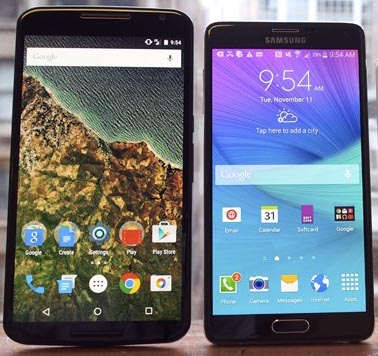 Google Nexus 6P
Introduced in late 2014, Motorola's Nexus 6P phone (left) shares the same 2560x1440 resolution as the Galaxy Note 4. The Nexus 6 was the first device to support Google's wireless network (see Project Fi). (Image courtesy of PCMag.com.)
Computer Desktop Encyclopedia THIS DEFINITION IS FOR PERSONAL USE ONLY All other reproduction is strictly prohibited without permission from the publisher. © 1981-2017 The Computer Language Company Inc. All rights reserved.
Link to this page
Cite this page

WORDS NEAR Google Nexus IN THE DICTIONARY