A camera that exposes photographic film to light in order to take a picture. Used since the late 1800s, the film is a chemical emulsion on a plastic substrate that is sensitive to light. When exposed, an analogous image of the scene is created within the chemical layer of the material; thus, film cameras are analog cameras (see analog). Film-based still cameras have been made for a variety of film types including 35mm, Advantix, 120, 220 and the larger 4x5 and 8x10 formats. Film movie cameras capture consecutive images (frames) on 8mm, 16mm and 35mm film. Contrast with digital camera. See cine. 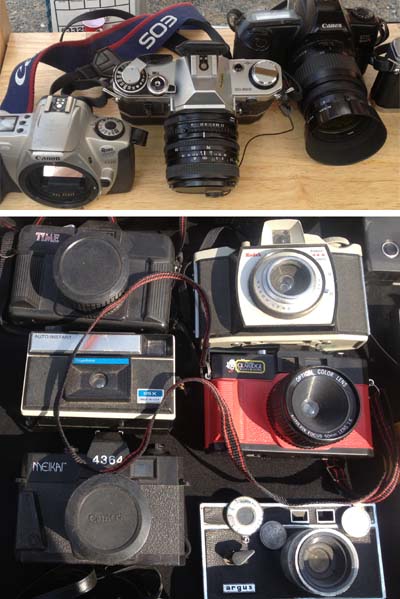 Now in Flea Markets
Analog film cameras are commonly found in flea markets where this was taken. At the top are single lens reflex cameras with interchangeable lenses. 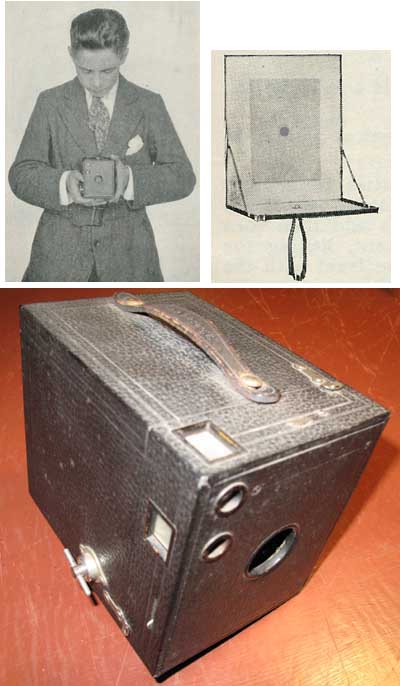 Model 3 Brownie Box Camera (1919)
Eastman Kodak sold millions of roll film Brownies from 1900 to the early 1960s. The manual advised "holding your breath" to take the picture. After pressing "flash paper" onto the lighting tray (top right), it burst into flames when a lit match was placed near the hole in the back.
Computer Desktop Encyclopedia THIS DEFINITION IS FOR PERSONAL USE ONLY All other reproduction is strictly prohibited without permission from the publisher. © 1981-2017 The Computer Language Company Inc. All rights reserved.
Link to this page
Cite this page

WORDS NEAR film camera IN THE DICTIONARY