A 3G cellular radio system based on earlier CDMA versions TIA/EIA IS-95a and IS-95b, CDMA2000 has been standardized by the EIA/TIA as IS-856 and approved by the ITU-R as part of the IMT-2000 family. The initial version, known as CDMA2000 1xRTT offers 2.5G capabilities within a single standard 1.25 MHz channel, effectively doubling the voice capacity of the predecessor 2G cdmaOne systems and offering theoretical data speeds up to 153 kbps through the use of quadrature phase shift keying (QPSK) modulation. An enhanced 3G version known as 1xEV-DO is a high data rate (HDR) version that employs 16-QPSK modulation in support of a peak data rate of 2.4 Mbps on the downlink and 153 kbps on the uplink. 3x, also known as IS-2000-A, is an enhancement that uses three cdmaOne carriers for total bandwidth of 3.75 MHz. See also 16-QPSK, 1XEV-DO, 1xRTT, 2G, 2.5G, 3G, 3x, bandwidth, carrier, CDMA, cdmaOne, cellular radio, downlink, IMT2000, ITU-R, modulation, QPSK, and uplink.

Enhancements to the CDMA cellular technology that increase the number of users on a voice circuit and provides high-speed packet data. In 2000, CDMA2000 was the first 3G technology to be deployed as part of the ITU's IMT-2000 framework (see IMT-2000). By 2009, the CDMA Development Group (CDG) reported more than 440 million CDMA2000 subscribers worldwide. CDMA2000 1x The first version of CDMA2000 enables up to 100 callers to share a single 1.25 MHz CDMA channel and provies a peak data rate of 153 Kbps. The use of the single channel is known as "1X" or "1xRTT" (1x Radio Transmission Technology). 1X has also been known as "IS-2000," "MC-1x," and "IMT-CDMA MultiCarrier 1x." CDMA2000 EV-DO Evolution-Data Optimized (EV-DO) technology increased the peak data rate first to 2.45 Mbps and later to 3.1 Mbps per channel, with the average user experiencing from 500 to 800 Kbps. For more details, see EV-DO. See CDMA, CDMA450, WCDMA, LTE and cellular generations. 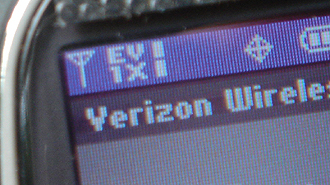 1X Signal Strength
The "1X" is the 1xRTT signal strength on this cellphone, which is only one bar at this moment. The "EV" signal, also one bar, is the EV-DO channel. As the phone travels, the strength of the two signals may differ.

WORDS NEAR CDMA2000 IN THE DICTIONARY